Vice president Ruud Drijsen is proud: the logistics service company Nippon Express managed to keep its standards high throughout 2020, despite all that happened. The new challenge for 2021 is the company’s move to a new building at Schiphol Trade Park, which was built to the highest sustainability standards.

Nippon Express has had a location in the Netherlands since the 1970s. The large Japanese logistics service company works in the air and on water, and has locations both at Amsterdam Airport Schiphol and the Port of Rotterdam. We speak to Ruud via an online call: like many others, he too is forced to work from home as much as possible.

Let’s address the elephant in the room straightaway.
“Of course, it’s been a strange year for Nippon. For a number of our customers, these are tense times, as they work in sectors that have been affected. This has had an effect on us, too, but thankfully, we have a wide range of clients. In some sectors, things are going really well, for example in high-tech, medical and food. The increase in business from these sectors has absorbed the decrease we have seen in other sectors, such as aerospace and automotive. Ultimately, the business is going well, but the volumes have decreased. We have also had to react quickly to unforeseen circumstances, for example when the available spaces at the carriers at Schiphol were scarce and too expensive. In those cases, we needed to fall back on other options, such as Frankfurt.”

What are you proud of when you look back on 2020?
“That we have managed to continue running the business in a safe and responsible way, despite COVID-19. This was partly thanks to our employees, who have been reliable as always. We have been able to deliver large volumes without delay. That’s something I look back on with pride. It’s been tense at times, but we always made it.”

And 2021 is the year of the big move!
“Yes, that’s right. In August last year, construction of our new building started at Schiphol Trade Park. Although there have been some delays, we still expect to be able to move in by late June. Schiphol Trade Park sets very high standards when it comes to the sustainability of the buildings that are being constructed there. At times, this led to some discussions with headquarters in Japan, but everyone will be happy with the end result. The new building is really of its time: sustainable, with solar panels, LED lighting and a special air circulation system. I wouldn’t be surprised if it became a leading example for other Nippon developments all over the world. In addition to the focus on sustainability, we’re looking into where we can automate and robotise certain processes. These are topics that Nippon Express has been familiar with for a long time now. In the near future, we’re going to take more steps towards digitalisation of paperwork. Forwarding is still very dependent on paper, and there should be much less of that. That’s what we’re currently working hard to achieve.”

What’s your biggest game changer in the near future?
“Our customers want continuity, quality and, increasingly, flexibility. Flexibly responding to our clients will be our big game changer. We used to have contracts with a period of five to 10 years. Now these have a duration of three years, sometimes even two; once, when a contract was being renewed, it was only one. We need to get the entire organisation geared towards this unpredictable flexibility. What does that mean for the future? Well, I think we will switch from centrally controlled warehouses to decentral, satellite-like warehouses, which can respond instantly to client demand. In today’s market, to guarantee a maximum of flexibility, we might rent a new office building rather than develop a new one.”

Not taking into account the current uncertainties, how do you look to the future?
He laughs: “We are businesspeople, we always see new opportunities. Right now, we are witnessing the growth in the life sciences sector and at Schiphol we can react to that directly. At the moment just for transit, but soon maybe also for cold storage. Furthermore, we are obviously keeping a close eye on the consequences of Brexit. We think there are many new opportunities there, because supply chains will need to be organised completely differently. We’re going to play a role in that.” 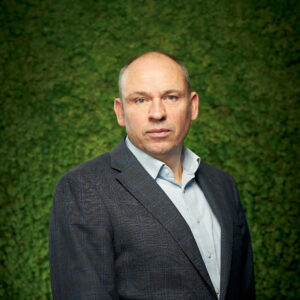