Home » Zoeken » ‘The energy transition impacts almost everything at the port’

‘The energy transition impacts almost everything at the port’

The Port of Amsterdam is the only port in the world that has committed to stop handling coal by 2030. It’s a radical move for the Netherlands’ and Europe’s second-biggest coal port. But Eduard de Visser, the director of Strategy & Innovation, sees it as a strategic step. ‘By doing this, we can inspire and attract companies that are focused on clean energy.’

What does the energy transition mean for the Port of Amsterdam?
“Switching over to alternative energy sources that are not harmful is much more than just an energy transition. As our focus shifts to other energy resources, almost everything at the port will change. Existing companies will adapt to be part of the energy transition. But there will also be new companies, and from other sectors, too. For example, recycling, circular chemicals and synthetic fuels.”

How is the port being changed by the transition to renewable energy?
“The port is still a gateway for goods to and from the EU and the Netherlands. Think aluminium, paper, wood and roll-on, roll-off [vehicle transports]. That’s where the bulk of the changes will occur. Coal-fired power stations are closing, the number of electric cars is increasing, new, cleaner fuels are hitting the market, and transport is becoming more efficient, resulting in more efficient use of fuel. These are factors that will influence the demand for the types of fuel that are prevalent in the port.”

Does that mean that some of the port’s business will be lost?
“Trade is changing, but that’s been happening since a port was first established here some 750 years ago. Some trade will disappear, but new trade will replace it. That’s a very positive development. The Port of Amsterdam has been busy with the energy transition for a long time already. A few years ago, we decided to stop all activities with coal by 2030. We were the first and, till now, the only port in the world to make that call. It was a strategic step, because it’s inspired companies that are focused on clean energy to set up here. The more of those companies are present here, the better the chance of a successful energy transition in the Amsterdam Metropolitan Area. It could even accelerate a reduction in CO2 throughout the Netherlands. That requires specialist expertise – and we no longer need to rely on talent from far afield for that now. And we want our port to continue to play a leading role with the next generation of energy resources too.”

How does that translate to the Port of Amsterdam’s focus on sustainability?
“Firstly, with a focus on green electricity: wind turbines at sea and solar parks. The largest offshore wind farm in the Netherlands is being built on the coast by IJmuiden. The second focus is to scale up production of green fuel. We’re building a green hydrogen plant on the Tata Steel site in partnership with Nouryon. It will use green electricity from the offshore wind farm. And the hydrogen will be transported to the Port of Amsterdam by a pipeline that we are laying in collaboration with Gasunie.

Amongst others, this green hydrogen will be used by a company that produces synthetic kerosene. That’s kerosene that isn’t derived from petroleum but rather from hydrogen. The company is an initiative of the Port of Amsterdam in collaboration with Schiphol, and the first batches of synthetic kerosene will be available in 2024. It will be a sustainable alternative to regular kerosene, the current fuel of choice in civil aviation.”

Then another game changer: COVID-19. How has the coronavirus impacted the Port?
“On the positive side, it certainly laid bare our essential role in supplying vital goods and services to the Netherlands. Probably the greatest impact of coronavirus was on the transshipment of coal, which dropped dramatically in 2020. Demand from the steel industry in Germany was suddenly at a standstill. Fortunately, there is also recovery, thanks to our focus on other sectors, such as sustainable energy and the shipping container market.”

Working from home has caught on. Is that a positive development?
“A personal advantage for me is that I can often enjoy a nice walk during meetings. But it also has disadvantages. For example, it’s tougher to get new partnerships off the ground when you cannot meet each other. With something as big as the energy transition, you need to forge alliances that transcend sectors, be it aviation or the port. It still boils down to being a people’s business: it goes more smoothly with face-to-face contact. People make the difference and that will continue to be the case.” 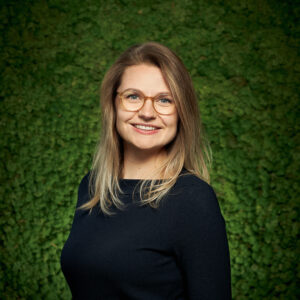