Last summer, the CEOs of LinkedIn, Cisco, McKinsey and Corning read the book The Seventh Sense by Joshua Cooper Ramo, which concisely puts forward an interesting conceptual framework that is relevant to the development of business parks.

The Seventh Sense is about the growing importance of networks in the fields of economics, politics and security. Ramo builds on existing ideas, such as the rise of the network economy (cf. Castells). Nevertheless, this book offers fascinating insights for area developers.

Seventh Sense
Ramo defines his Seventh Sense as ‘the ability to look at any object and see the way in which it is changed by connection’. One well-known example is the autonomous car. Ramo divides the world into two groups: people who understand this (the winners) and those who don’t (the losers). ‘Masters of the Seventh Sense see wired topologies shot through existing landscapes (…). Even though these topologies are often invisible or made up only of narrow fiber-optic strings, it’s important that we try to picture them as real, as places where fortunes will be made and lost, wars fought – and every bit as influential as physical geography.’

A topology is a network structure and describes the interconnectivity among nodes in a network, the way in which they are connected, and the distance between them. In the example of autonomous cars, the cars can be seen as nodes, and the way in which the nodes are connected is the topology. A topological question is therefore whether all the cars in a particular area are connected, or whether there are point-to-point connections between cars that are in visual contact.

According to Ramo, networks are not very tolerant of each other. ‘Networks optimize themselves to be quick, the better to compress time. The winner takes all because we all benefit from the resulting efficiency.’ An obvious example is the dominance of IT giants such as Microsoft (Office and Windows), Google and Facebook.

Networks are controlled by gatekeepers. These gatekeepers (people, protocols, treaties) determine who has access to the network, and they, therefore, have a lot of power. ‘If connection changes the nature of an object, it also elevates those who control that connection to a level of rare power and influence.’ It is at this point that the book heads off into the darker side of a world managed through networks. A large part is devoted to cybersecurity, the risks of connection, control over networks and the abuse of power. One example is the discussion on net neutrality currently taking place in the United States and elsewhere.

Customs cargo control
Around Schiphol Airport, a lot of cargo is transported between the first-line and second-line warehouses which are under customs supervision. The first-line warehouses are typically directly adjacent to the runways and belong to companies that load, unload and handle cargo. The goods then go to the second-line warehouses belonging to other companies, from where they are then distributed. This may equally be temporary storage and/or value added logistics, after which the goods are sent back to the first line for shipment.

If all these transports were to pass through traditional customs procedures, it would take an excessive amount of time and money. A paperless cargo system (DGVS) has therefore been created, which makes it possible to move goods between first- and second-line warehouses without declaring them to customs. Customs determines who is granted a DGVS permit, thus acting as the gatekeeper to this network. Until recently, the DGVS scheme was also linked to a demarcated geographical area. The connection of a logistical consignment to a network (DGVS) affects the possibilities for cargo handling. In particular, the transport’s speed and security are increased. This topology partly determines the success of logistical business parks around Schiphol, because it yields a competitive advantage in relation to other airport regions.

Internet of Things
The DGVS might be innovative, but the Internet of Things will revolutionise the logistics sector. Real-time cargo tracking in combination with information on traffic and loading capacity can significantly improve the logistical process. There are already experiments with RFID (Radio-Frequency Identification), although this has not yet made a large-scale breakthrough.

When this happens, it will create entirely new topologies that can strongly influence the competitive positions of business parks. The traditional concept of accessibility will be redefined. The question is also whether gatekeepers will manage the networks from their logistical control towers. The ‘winner takes all’ principle of networks means that the logistics sector may have to prepare for an even stronger consolidation.

An interesting thought is that less densely populated areas are the most suitable for drones. What will this mean for the design of logistical chains? In relation to Ramo’s Seventh Sense, the question is how a drone changes as an object when it is connected to a logistical network. The potential seems vast. Here too, the question arises as to who will be the gatekeepers of the drone networks. And according to Ramo, the circle is complete when we consider what someone with evil intentions could achieve with drones.

In conclusion
This article has focused primarily on logistics. Other topologies can be found in the areas of autonomous cars, lighting with sensors, remote-controlled climate control in buildings, security cameras, fibre-optic networks, internet exchanges (cf. AMS-IX), desk/office sharing concepts, etc. In summary, to remain within the terminology of The Seventh Sense: when you’re developing business parks, you also have to look at topologies. They are partly responsible for determining who will be the winners and losers of the future. 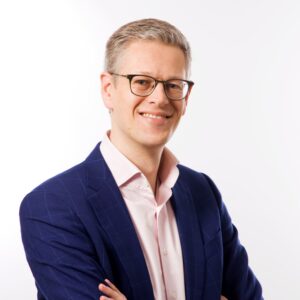