Home » Zoeken » ‘Your neighbourhood can be the whole world’

‘Your neighbourhood can be the whole world’

Molenaar Haarlem sells and rents out road plates and crane mats. Dennis Molenaar (48) is the fifth generation at the helm. In his office, where the walls are lined with art, he talks enthusiastically about this 137-year-old family business.

Road plates
‘You’ll come across our road plates everywhere, all over the country. The KLM Open – a big golf tournament –, the Loveland and Mystic Gardens festivals, and at a lot of venues during the Amsterdam Dance Event. From King’s Day at the end of April to mid-November we have an extremely busy festival schedule. But it’s not only festivals, of course – you also need road plates for less pleasant events. If a plane crashes, for example, all the wreckage has to be removed. We helped with the Bijlmer disaster, and in 2009, when the Turkish Airlines plane crashed on the runway at Schiphol Airport. The dead chestnut tree from the garden of the Anne Frank House was hauled out on our road plates.

One ceremonial event we were involved in was the commemoration of the 60th anniversary of D-Day in Normandy. And very recently there was the relocation of a Boeing 747 from Schiphol to the front garden of the Corendon Village Hotel. Whatever the occasion, we never turn down a job!’

Crane mats
‘The outriggers – the “legs” – of cranes often exert enormous pressure, so a road plate isn’t enough; for heavier loads there are crane mats, usually made of tropical hardwood. That sounds strange: is wood stronger than steel? The main thing is that the pressure is distributed differently on wood than on steel. Steel is less flexible and a lot heavier than wood. And it costs a lot more to make a good crane mat from steel than from wood. Though the longer mats and bridge sections are made of steel. For the rest, I don’t know exactly – an engineer could tell you a lot more about it.’

Crane enthusiast
‘I started coming to the business when I was just a boy, washing cars for pocket money, taking a peek. And going in the crane cabin, I loved that. I could drive a crane before I could drive a car. I’ve been a real crane enthusiast ever since, that’s just stuck with me – fortunately I’m not the only one in the company. I regularly chat to colleagues about the cranes we have.’

Driver
‘I started working in the company in 1996 as a driver. I come from a humble family of people with big hands and strong backs. We learn the trade from scratch. The fact that I started off in the company as one of the workers gives me a lot of advantages. For around eight years I’ve been doing a lot of organisational work, including the planning and a lot to do with running the day-to-day business. Now I’m delegating more and more jobs so I can focus on managing the company. That’s a healthier situation – of course I don’t need to be involved in everything. I make the big tenders and think about the future of the company. I only let go of the planning two years ago, when I handed it over to Daan, a really good, expert colleague.’

Community
‘We’re totally embedded in the local community; it simply makes sense for us as a company. We sponsor playground associations, an animal shelter, a sports club, things like that. And recently, along with some colleagues, we made some wooden planter boxes for a social initiative. We really feel warmly towards the local people. What’s more, your neighbourhood can be the whole world. One of my daughters helped build a school in Ghana, which we sponsored. And I went to Sumatra and Suriname with my family to help build orphanages.

By making our business more sustainable, we also take care of the community. Crane mats are made of tropical hardwood, azobé from Africa. As yet there’s no viable alternative – what people have come up so far with costs twice as much. I thought there must be a way of using plastic with steel reinforcements, so I had a look around and I found out that there are other people with the same idea. So people are thinking about it, and I expect that eventually we won’t need to use wood at all.’

Good neighbours
‘Until the move to PolanenPark we were based in the village of Penningsveer near Haarlem. Everyone knows each other there, and in my grandfather’s day, if there was a problem you would simply talk to each other about it, but things have changed since those days. In the 1980s we used to drive a truck through the village maybe twice a day, but the number rose as we grew. We had more and more trucks driving back and forth through the village, and that caused some irritation. We wanted to stay good neighbours, but also continue to grow. PolanenPark gave us that opportunity. We all depend on each other, that’s the way I see it. When we need drivers, I first look for good people locally. On both a large and small scale, we’re seeking harmony with our environment.’ 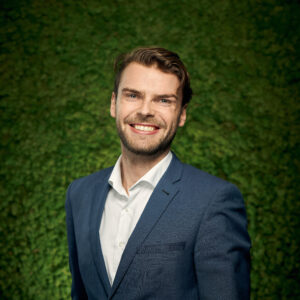