On Monday, 18 June 2018, a new bio-based bridge was officially opened at Schiphol Logistics Park in Rozenburg, the Netherlands. This unique pedestrian bridge was a joint effort of Schiphol Logistics Park, FiberCore Europe and Delft University of Technology (TU Delft). The new bridge is the first of its kind, successfully combining conventional construction methods with highly sustainable materials. The use of bio-based materials gives the bridge its innovative character. 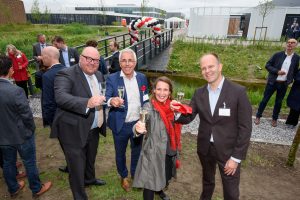 Architect Rafail Gkaidatzis of the Bridge Design Group at Delft University of Technology devoted his graduate research to investigating how to build a pedestrian bridge using as much bio-based material as possible. His research ultimately led to the construction of a new ‘bio-basalt-balsa’ (B3) bridge measuring 15 metres long and 2 metres wide. The bridge spans a canal separating a public recreation area known as Ringdijkpark from Naritaweg at Schiphol Logistics Park and is open to the public. It enables business park employees to relax in the recreation area and provides residents of the nearby Aalsmeerderdijk neighbourhood with easy access to the bus stop at Schiphol Logistics Park.

Built to last 100 years or more
The surface of the bridge was built using as much bio-based material as possible. The primary components of the bridge are basalt fibres and bio-based polyester resin. Fibre-reinforced plastics (also known as composites) have a number of advantages over traditional construction materials, including greater strength, lower energy costs during construction, less maintenance, and a longer lifespan. Together, these characteristics not only make it a safe choice for construction, but also a sustainable one. The material will not decay or corrode. As a result, it is estimated that the bridge will last 100 years or more before needing to be replaced, and will require only minimal maintenance. A similar experimental bridge was installed in the Dutch city of Eindhoven in 2016, though the expected lifespan of that bridge is not known.

Lava
As the name suggests, basalt fibres are made of basalt, an extrusive igneous rock formed from lava that has cooled and hardened. Basalt fibres have the advantage of being stronger than other technical fibres such as fibreglass. Due to its strength, less of the material is needed to construct the bridge, resulting in a surprisingly lightweight structure. Basalt fibres are also fully recyclable – due to their volcanic origin, the basalt fibres in the bridge can be melted down and reused once the structure has reached the end of its lifespan.

The resin used in constructing the bridge is partly organic in origin. Polyester resins are formed by the reaction of large number of molecules containing both a carboxylic acid and an alcohol group in the molecular chain. For this project, bio-resin glycol made from vegetable glycerine was used.

FiberCore Europe has extensive experience in building composite bridges and in working with bio-resin, which it used to construct a bridge in 2012. However, the Schiphol Logistics Park bridge contains more bio-based materials than any previous project. It is this innovative combination of materials that makes the project so unique. These particular materials have never before been used in bridge construction. The Schiphol Logistics Park project therefore not only represents a major step towards more sustainable bridge construction, but also contributes to building a more sustainable society.

The composite bridge at Schiphol Logistics Park was made possible with the support of Mafic SA, BALTEK VBC by Airex AG (a member of 3A Composites), Poly Base Produktie BV, and Royal HaskoningDHV. 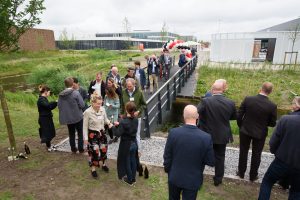 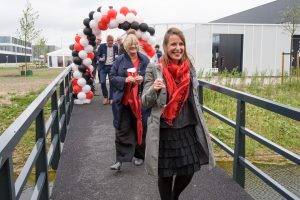 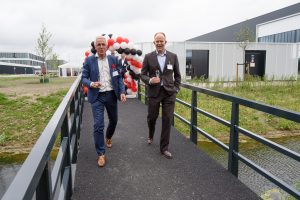 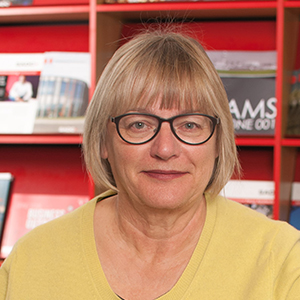