The City of Amsterdam and Schiphol Area Development Company (SADC) are to start the development of the second phase of Business Park Amsterdam Osdorp in the coming autumn. Nearly all the lots issued in phase 1 of the business park have been sold, and because of the growing demand for business premises in the region around Amsterdam, it has been decided to begin the development of this new industrial area in Amsterdam. This is partly due to the increasing pressure on the housing market in Amsterdam, which means that businesses in the city have to make way for new housing. The development plans will be made in close consultation with local residents, who are shortly to receive an invitation.

Circular development, sustainability, ecology, agriculture and nature
The business park is centrally located in the Amsterdam Metropolitan Area, and comprises a large part of the working area between the A9 and A5 motorways, in combination with Lijnden, Lijndenhof and the first development phase of Business Park Amsterdam Osdorp. The new business park also makes the connection between the city and countryside (with the Tuinen van West nature, urban farming and recreation area), and between the city, Amsterdam Airport Schiphol and the Port of Amsterdam. To integrate the present functions with agriculture, nature and ecology, SADC and the City of Amsterdam are developing this area to be future proof, sustainable and circular, according to the latest circular principals. This essentially means adding value to the environment, for example through recycling, sustainable energy generation in the area, and ecological management.

Participation
The basis for the development has already been laid. The zoning plan has been agreed, and there is a plan and draft schedule of requirements for the entire Lutkemeer polder. This means the outline of the development has been established, but the detailed plans have yet to be made, for example in relation to urban planning and the integration of nature and ecology. SADC and the City of Amsterdam would like to develop these plans in collaboration with a variety of parties, who will shortly receive a personal invitation.

Boerderij de Boterbloem ecological farm
Discussions are currently being held with Boerderij de Boterbloem, an organic farm providing activities for psychiatric patients. The farm will remain on the Lutkemeerweg, and there may be possibilities for it to fulfil a function in relation to the new business park. At present, there is sufficient flexibility in the plans to explore partnership opportunities. This will take place in discussion with Trijntje Hoogendam, the owner of the farm. Peter Joustra, the project director: “We would welcome the incorporation of Boerderij de Boterbloem for various reasons, because it has played an important role in the area and can again be significant in the new ‘working landscape’ we envisage. A good example is Tuinen van West, where entrepreneurs are showing that urban farming is valued by society. This could also happen here, but with a greater focus on the neighbourhood and the new users of the business park.”

An important trend that offers possibilities for cooperation is the development of a multifunctional ‘working landscape’, where both businesses and their employees and associates are connected in a contemporary way with the origin of the area and the increased visibility of food production. Even though its area and form will greatly change, the farm can play an important role in this. “We are currently investigating whether it is possible to retain an area for food production around the farmhouse De Boterbloem. And in addition, we are looking at a range of other possibilities for the farm: as a meeting place for new users, as an ecological manager of the area, and as an example farm to show where our food comes from,” says Peter Joustra. 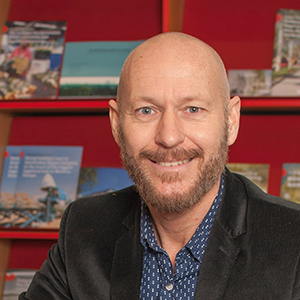