The spring edition of the magazine Haarlemmermeer INTO business featured an article on Vincent van ’t Schip, owner of Rutges Cargo Europe, located at Schiphol Logistics Park. Read his story below.

‘Everything under one roof’
Rutges Cargo Europe moved into a newly constructed building at Schiphol Logistics Park in early February 2020. The sloping side wall is already an eye-catching sight from the A4. “Here we’re on the boundary of where buildings are permitted,” says Vincent van ‘t Schip, owner of Rutges Cargo Europe. This is because construction isn’t allowed in the vicinity of the Schiphol Airport runways. The area outside the building is only for use as a lorry park.

There are actually three companies in the building. Rutges Cargo Europe, which Vincent revived in 2015 after a bankruptcy, specialises in the national and international transport of pharmaceutical products and high value goods (especially electronics), and has a separate branch for aerospace and sensitive transport (delicate equipment such as satellites and scanners).

Until recently, JM Logistics, which Vincent has headed since 2012, was located in Nieuw-Vennep. This internationally oriented company focuses on oversized transport, mainly of agricultural machinery. The two companies have a total of 122 employees and 98 trucks: 58 for Rutges Cargo and 40 for JM Logistics. Finally, Truck & Trailer Service Schiphol is an independently operating maintenance company, which offers a full maintenance service both for the fleet internally and for third parties, as well as the rental and sale of equipment.

Crowning glory
Rutges Cargo Europe has always had a location at Schiphol. When Vincent first took the helm after the bankruptcy, it was not an easy time. “A company doesn’t just go bankrupt for no reason. We really had to pull out all the stops. If you can crown this with a great location at Schiphol Logistics Park, it’s really something to be proud of.”

Although there was nothing wrong with the former locations on Prestwickweg at Schiphol-Zuidoost and at Spoorzicht in Nieuw-Vennep, Vincent decided to look for a new building where he could house the three companies. “We wanted to take a step towards growth, especially in the field of logistics. Here you can organise everything well under one roof.”

Prepared for Brexit
Logistics is a new activity for Rutges Cargo Europe. By designating 6,000 m² for logistics, the company can facilitate existing and new customers. “The idea is that Rutges Cargo Europe should become an all-round player. You can see that the transport market is constantly under pressure and is often price-based. If you can roll out logistics well, then you’re an all-round player and you can also sit at the table as partners.”

In the field of transport, Vincent’s companies are already well prepared for Brexit. The new building also offers fresh possibilities in this area. “If customers are considering relocating their business in the UK back to the mainland, we have the possibilities here to facilitate them.”

Adopt a roundabout
If you drive into the Changiweg in Rozenburg at Schiphol Logistics Park, you end up at a roundabout. In practice it’s a dead end, mainly used by the lorries and employees of Rutges Cargo Europe and JM Logistics. “I asked SADC, the developer of this business park, whether it would be possible for us to adopt the roundabout. This means that we’ll maintain it nicely, and with a certain nod towards our activities. SADC has responded positively, so we’re now looking into the possibilities.” 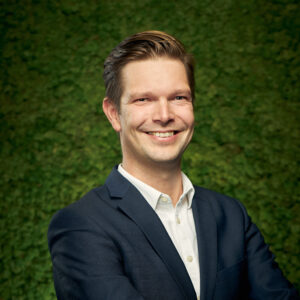